Travel Like a Local: My Favorite Places in Amman

Ahlan wa Sahlan! Welcome to Amman! Wondering what are the top things to do in Amman? Or, want to know what sights you shouldn’t miss? Want to know the best off-the-beaten path places to check out? Or, just interested in the city that I call home? Well, if so, then this post is for you!Home to approximately 4 million, Jordan’s capital city is one you could whirl through in a day or spend weeks exploring and using as a base to see much of northern and eastern Jordan. After 8 months living in this city, I wanted to share with you some of my favorite places in Amman with you.

One of the most iconic places in Amman, the Citadel sits atop one of Amman’s many hills with sweeping views of the city.  The Citadel contains the Temple of Hercules from the Roman rule of Amman, an archeological museum, and the Umayyad Palace.  Each distinct and interesting in its own way, these sites on the Citadel provide the perfect introduction to the history of Amman and allow you to orient yourself in the city.

The Citadel is easily accessible via taxi from anywhere in the city, and you can walk to it from downtown (just be prepared for lots of stairs up the hill!).  I recommend walking!

The Temple of Hercules atop the Citadel in Amman

Craig at the Umayyad Palace

Jumping at the Citadel!

Two of the most famous eateries in Amman are located downtown and just down the street from each other.  Hashem, which is said to be the oldest restaurant in Amman, is famous for its hummus and falafel.  Our standard order when going is:  one hummus, one falafel, and two cokes.  Open 24 hours a day, there isn’t a time that Hashem isn’t busy!

Just down the street from Hashem (when you leave the restaurant, turn left, walk straight through the intersection, walk down the sidewalk and you will pass Art Hotel and a small book shop/stand.  Just past the bookstand is a small alley your left, where you will likely see a line and lots of people walking around carrying paper plates.  This line leads to Habibah, which serves delicious khunafa.  (If you don’t see a line, it may mean Habibah is closed.  Try again later!  If you reach the Arab Bank, you’ve gone too far!)  Cheese-y, sticky, and sweet this Palestinian desert is delicious, and Jordan is famous for it.  Make sure not to miss out!

Breakfast, lunch, or dinner:  Hashem’s falafel or hummus is the best!

Khunafa is always the perfect choice after hummus and falafel! (Note: This photo of knuafa was actually taken in Palestine in Nablus. Apparently, I devour the knuafa from Habibah so quickly that I’ve never gotten a good photo of it!)

Wandering through Downtown and the Souq

Continuing through downtown, after getting your fill at Hashem and Habibah, make you take time to just walk through downtown Amman’s winding streets. It’s a safe place to walk around (although it is said to avoid the area around the mosque on Friday afternoons after prayers as if there are any demonstrations or violence they sometimes center around this area), and people will go out of their way to help you. Pick up some produce at one of the souqs, be on the lookout for random remains of the Roman city, try some sugarcane juice, do a little shopping, and people-watch to your heart’s content. Downtown (or Al Balad) is one of my favorite places in Amman.

Walking through one of the souqs (or markets) in downtown Amman.

More produce for sale along the streets of downtown Amman.

If you love spices, make sure to stop by a spice shop in downtown Amman to select some to take home!

A typical building in downtown Amman

Craig at the Odeon in downtown Amman, just down the street from the Roman Theater.

Taking It All in from the Roman Theater

If you want to continue wandering through downtown, wander all the way down to the Roman Theater.  Central to downtown Amman, this beautifully restored theater has been repaired and incorporated into downtown.  During the day, you can buy a ticket for 1JD to climb to the top and watch the hustle and bustle of downtown Amman.  It’s also a great place to try to catch sunset.  Or, in the evenings (particularly Thursdays) after the theater is closed for the day, the plaza out in front fills with people — children playing, vendors selling snacks and balloons, groups playing soccer, and much more.  A ticket to the Roman Theater also includes entrance for the Folklore Museum and Museum of Popular Traditions, which are small and interesting places to look into life in Jordan.

Looking over downtown Amman and all the way across to the Citadel from the top of the Roman Theater.

Vendors, people watching, soccer/football games, and more in the plaza below the Roman Theater.

If you are interested in visiting a mosque while in Jordan, your best bet is King Abdullah Mosque located in the neighborhood of Jabal Weibdeh.  The mosque is supposed to be open Saturday through Thursday 8:00 am – 11:00 am and 12:30 pm – 2:00 pm. In addition to visiting the mosque itself, there is a small museum open to visitors.  Once you arrive (either a quick taxi ride or enjoyable walk from downtown), there are signs in English directing you where to enter.  (Women, if you aren’t fully covered or are wearing pants, you may be asked to wear an abaya.)  There is a 2 JD admission fee.

Inside the King Abdullah Mosque

On the grounds of the King Abdullah Mosque

It’s all in the details.  Beautifully patterned carpet inside the King Abdullah Mosque.

Abaya on and shoes off inside the King Abdullah Mosque

One of my favorite Friday afternoon activities is visiting the Souq Abdali.  (Now, actually located in Ras Al Ain.)  The souq sells used clothing (many from the US from Goodwill, Value Village, and other resale stores), household goods, shoes, and a plethora of other random items.  For just 1JD, you can buy a new shirt or have a cup of corn with spices (a favorite snack here in Amman).  It’s a great place to mingle among locals and get a look at a very local side of Amman.

Tables and racks of used clothes line the souq with vendors yelling out prices.

From clothes to Barbies to household goods.  The souq has it all!

Rack, upon rack of used clothes, mainly from the U.S.

Graffiti + plants = art along the walls of the parking lot where the souq takes place.

Souq is packed on Friday afternoons after prayers let out!  For more space to shop, come earlier in the day on Fridays.

Need a bag?  The souq has many!

Toys for sale at the souq.

Delicious food + epic views = Wild Jordan Cafe.  Wild Jordan is located near Rainbow Street and downtown Amman.  With interesting takes on local dishes and lots of fresh food options, Wild Jordan is one of my favorite places to lounge in the afternoon.  You can see the Citadel, downtown, and much of Amman from its location.  Also, at the Wild Jordan center, you can get information about exploring the country’s national parks and check out its neat gift shop.  Wild Jordan is a don’t miss spot here in Amman!

Great salads (which are a nice break from the meat and french fries that I often eat here in Jordan!).  I also recommend the grilled halloumi sandwich.

Not far from Wild Jordan, make sure not to miss Rainbow Street.  Filled with cute cafes, restaurants, and shops, Rainbow Street is perfect for browsing.  Check out a film at the Rainbow Theater, grab some ice cream, purchase a souvenir, or just window shop, Rainbow Street is the perfect place for a leisurely stroll in Amman!

Inside the lovely [email protected] just off Rainbow Street.

People Watching on The Boulevard or Wakalat Street

Want to see a different side of Amman?  Visit one of the pedestrian shopping areas, such as The Boulevard (located in Abdali) or Wakalat Street (in Sweifieh).  If you spend most of your time in downtown Amman, you will feel like you are in a different city at the Boulevard of Abdali.  No or fewer cars, places for pedestrians to safely walk, art installations, high-end shopping, cafes spilling out onto the sidewalk, and more.

The Boulevard is always seasonally decorated and is a great place to stroll and see a different side of Amman.

Time for Christmas, including an ice rink, at the Boulevard in Abdali last December.

Food is an integral part of Middle Eastern cultural.  One of the best places to get a local meal with all of the mezze and mansef you want is Reem Al Bawadi.

I recommend starting with the mezze:  hummus, tabbouleh (parsley salad with tomatoes or pomegranate), fattoush (Arabic salad with pieces of crunchy fried bread), fried halloumi cheese, moutabel (eggplant dip), and kubbeh (minced meat fried in a cracked wheat crust).  And, then, one order of mansef, to be shared.  (Depending on the size of your group, you could also get an order of the mixed grill.)

Mansef is a traditional Jordanian dish of lamb (and sometimes goat) atop a bed of rice with pine nuts.  Poured on top is a thick yogurt sauce.  Mansef is traditionally eaten on a huge plate and with hands; however, many restaurants will have silverware and plates and split up the order among those at the table.  Plus, don’t forget to try a glass of lemonade with mint!

Dinner with friends at Reem Al Bawadi.  Enjoying mezze and waiting on our masnef to arrive!

Another delicious food option…  Not far from downtown, Rainbow Street, and Wild Jordan is Shams Al Balad, a cute cafe with indoor and outdoor seating and great local food.  For breakfast/brunch, I recommend an order of hummus, an order of foul, bread (khubez) with cheese and za’atar, eggs and potato, and some Jordanian tea.

Need a snack or a quick lunch while exploring Amman, look no further from the endless number of shawarma stands and restaurants.  Here are some of my favorite:  Al Keef (near 7th circle, run by Syrians), Al Karam (chains all over Amman – my favorite is their beef shawarma), Bashka (my go-to for chicken shawarma), and Al Basha (downtown).  For just 1 JD, you can usually get a shawarma sandwich and for between 2 and 4 JD you can get a meal with a sandwich chopped up, fries, and a soda.

For more about Jordan my travels and life as an expat in Amman, check out other Foreign Loren posts here!

7 Lessons from 7 Months on the Road 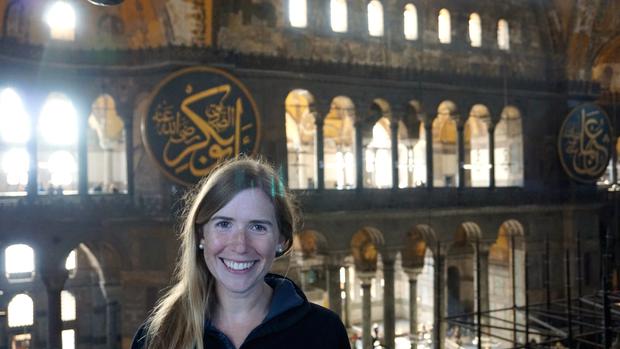